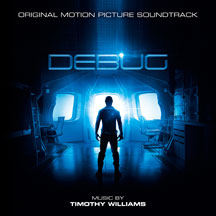 Six young computer hackers sent to work on a derelict space freighter, are forced to match wits with a vengeful artificial intelligence that would kill to be human.

DEBUG does a good job at paying homage to sci-fi thrillers of the past...

Mixing deep space with computers bent on becoming human is no doubt a recipe for some top notch horror. Read more at http://www.joblo.com/horror-movies/news/david-hewletts-sci-fi-thriller-debug-wraps-principal-photography#shpJzYGudLbK0JJ2.99

...really took the wall of sound concept to another level & mixed in a few retro bits with the steely cold sci-fi music. Williams is an exciting voice coming through and I can't wait to hear what he does next.