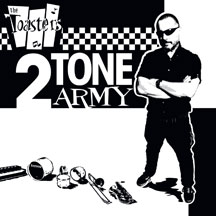 Way back in the year 1996, modern U.S. ska was ruling both the air waves (in certain cities) and was plastered all over MTV! Stores like Hot Topic and Virgin Record shops were actually selling ska cds by the case load! There were tons of new bands and some of the old timers were touring again and releasing new material. The Toasters, were doing what they always do, playing shows and recording new material. Coming fresh off the tails of "Dub 56", The Toasters were snatched up by Nickelodeon to produce music for their upcoming variety cartoon / animated show KABLAM! With the band in the studio trying out new tunes, a wealth of material developed from these sessions, both of which would fuel The Toasters next two releases. The first being "Hard Band For Dead", the later being "Don't Let The Bastards Grind You Down". H.B.F.D. led to a surge in interest in The Toasters, Moon Ska Records and modern ska music in general. Music videos were made for "2Tone Army" and "I Wasn't Going To Call You Anyway". The album was released in multiple countries including Brazil which took the band on a South American tour (later to be released as a 7inch and CD!). With Megalith Records in place and former stock of The Toasters Moon Ska releases running out, we have been re-pressing out of print titles loaded with unreleased material and new artwork. "Hard Band For Dead" was next on the chopping block and we now bring to you "2Tone Army", the full "Hard Band For Dead" album, plus unreleased tracks including early demo versions of songs on the album and alternate takes to those that were there before! We also have released this album on vinyl for the first time ever! If you are a vinyl fan, be sure to check it out!