Future cop JACK DETH accidentally travels to the medieval world of Orpheus and fights a new breed of Trancers! 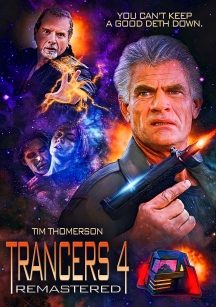 Jack Deth jumps back to the future in this thrilling fourth chapter in Charles Band's immortal sci-fi action series! When the time-travelling TCL chamber goes haywire, perpetually surly supercop Jack Deth (once more played by the iconic Tim Thomerson) accidentally winds up in a deadly alternate dimension in which a new breed of the ghoulish Trancers have assumed complete control. Will Jack and the rebel group of "Tunnel Rats" bring down the evil Trancer reign, or will they be crushed by the tyrannical fist of the evil Lord Caliban? TRANCER 4: JACK OF SWORDS is directed by Emmy Award winner David Nutter (GAME OF THRONES) and features a cast that includes Full Moon favorite Stacie Randall (PUPPET MASTER 4) and Stephen Macht (THE MONSTER SQUAD). Get ready for two-fisted adventure and insane intrigue, Jack Deth style, remastered from the original negative for the FIRST TIME in startling HD! Don't be a squid! Dive in!

One of the funniest and enjoyable Trancers.