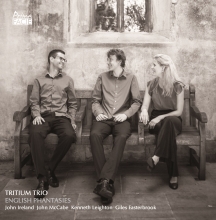 Formed in January 2013 at the Royal Academy of Music, the Tritium Trio is a truly multinational ensemble, comprising Slovenian clarinettist Jernej Albreht, Swedish cellist Lydia Hillerudh, and Australian pianist Joseph Havlat. The foremost desire of the group is to explore repertoire other than pieces typically played by this ensemble type, in order to make rehearsals and performances as refreshing and enlightening as possible for both the trio and the audience they may have.

Recorded with the beautiful Fazioli piano at Turner Sims, Southampton this is a feast of 20th Century composition at its very best played by one of the most stunning trios in the world.