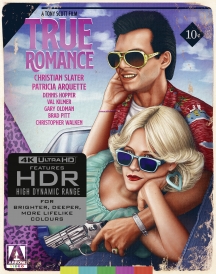 If True Romance were only a single scene – a short film – just a verbal sparring duel between Christopher Walken and Dennis Hopper, it’d reign among the greatest shorts ever made.

...one of the best films of the late 20th century...this release from Arrow should be a welcome addition to your library, as it boasts excellent technical merits and Arrow's usual supply of outstanding supplements.

To say this is a masterpiece is an understatement.

(Director Tony) Scott was firing on all cylinders here and made a film that will be remembered for generations.

Those mad geniuses at Arrow have done it again. Their UHD edition of Tony Scott’s True Romance is the definitive edition of the film...and one of the gems of early 1990s cinema. Arrow Video has given it the 4K UHD package it deserves. Highest Possible Recommendations!!!

—A. W. Kautzer, The Movie Isle

True Romance is my favorite Quentin Tarantino film. This is so worth the 4K UHD upgrade.

True Romance makes its way to 4K UHD via an exceptional release from Arrow Films that comes with a solid audio and video presentation and a wealth of insightful extras, most notably an audio commentary with Quentin Tarantino, highly recommended.

Tarantino’s patented dialogue, combined with Scott’s casting choices and staging, resulted in a film that’s stood the test of time…

True Romance in its own right, is a classic film with a dedicated following.

...this is the best the film has looked since it first unspooled in theaters nearly 30 years ago. If you’re a fan, this is the pinnacle of True Romance on home video.

Arrow Video once again proves why they’re the big dogs in the boutique label market, and have released a stunning 4K UltraHD set, with an amazing amount of extras.