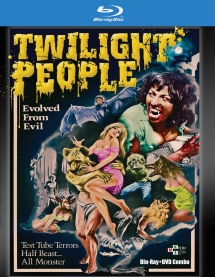 ANIMAL DESIRES...HUMAN LUST! Matt Farrell (John Ashley) is plucked from the sea while skin-diving and taken to the foreboding fortress of Dr. Gordon. He is to become part of the doctor's diabolical experiment to create a race of super people. This twisted and maniacal doctor's experiments have so far only created terrifying and hideous creatures. His human guinea pigs, freed by the doctor's own daughter, turn the island hideaway into a bloodbath of revenge and terror! Cult Film Queen Pam Grier is featured as "Panther Woman".

'Basically a retread of HG Wells 'The Island of Dr Moreau,' ...It does have some good special effects and excellent make-up... ...mistakes include human beings crossed with Apes, Bats and even a Panther. The Panther is a non-speaking role for Pam Grier which involves her savaging everyone in sight and showing the butt kicking prowess that was to make her a success in future films.' 10k Bullets

Long time monster movie fans and good/bad movie enthusiasts are going to get the most out of Twilight People than your average viewer. This little gem is now presented on Blu-ray with some entertaining extras to supplement it.