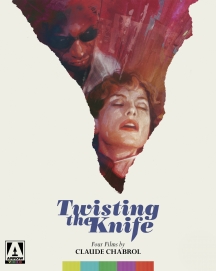 For five decades Claude Chabrol navigated the unpredictable waters of Cinema, leaving in his wake fifty-five feature films that remain among the most quietly devastating genre movies ever made. The Swindle sees Chabrol at perhaps his most playful as a pair of scam artists, Isabelle Huppert and Michel Serrault, get in over their heads. But who is scamming who and who do you trust in a life built on so many lies? The murder of a 10-year-old girl sparks rumors and gossip in The Color of Lies, as suspicion falls on René (Jacques Gamblin) the dour once famous painter, now art teacher, who was the last person to see her alive. Enigmatic, perverse, seductive, Isabelle Huppert encapsulates everything that makes Nightcap a film John Waters calls "Cinematic Perfection" in this tale of suppressed family secrets. Finally, in The Flower of Evil, incest, old money and intergenerational guilt come under the scalpel as an outwardly perfect bourgeois family begins to unravel when the wife involves herself in politics. Though influenced by Fritz Lang, Alfred Hitchcock and Jean Renoir, Chabrol's voice was entirely and assuredly his own, influencing in turn filmmakers like Bong Joon-ho, James Gray and Dominik Moll. His amused, unblinkered view of life and refusal to judge his characters makes his films timelessly relevant and accessible to all. Arrow Video is proud to present this second collection of films by Claude Chabrol with a wealth of new and archival extras.

Even when it threatens to sink into the familiar mechanics of a double-dealing heist story, Chabrol keeps curiosity piqued, the actors delightful and the outcome in sufficient question

Illustrates the way that comedy is serious business, divulging remarkable intelligence to viewers about the human condition

Huppert and Serrault's perfectly synched performances -- effortless, enviable and embarrassingly good -- get plenty of comic mileage from the shifting balances of power

[Claude Chabrol] began directing in 1958, and has never committed an ill-made film, has rarely made a dull one, and has occasionally created a gem.

I feel such an affection for Chabrol and his work

Thus, for my money, and regardless, the film is splendidly acted all around, especially by Suzanne Flon as Aunt Line. An eclectic film, and one not without bouts of dark humor, including a truly bizarre sequence related to an accidental murder, stylistically, this is a film experience with lush cinematography of the contemporary Bordeaux region, filled with sensitive compositional choices and careful set-ups. Delightful and exquisite, from all angles.

Twisting The Knife: Four Films By Claude Chabrol shows the French director was making nimble cinematic mysteries even late into his career. He would take us to the quaint parts of the country with the most noble of characters, but wouldn’t produce cute movies. Between this boxset and last February’s Lies & Deceit – Five Films by Claude Chabrol, we’ve received a retrospective of his later years that show the director shouldn’t be overlooked in the arthouse. This is the perfect way to discover Chabrol and make up for your International Cinema teacher skipping his filmography.

Arrow’s 4-disc set is a doozy, with introductions, interviews, commentaries and visual essays supporting every film along with an 80-page collector’s booklet.  The Swindle, Nightcap and The Flower of Evil all get new 4K restorations but you won’t find anything to complain about for The Color of Lies either.  Every film looks and sounds terrific.

This makes a fantastic companion piece to Lies and Deceit: Five Films by Claude Chabrol, but also is a fine standalone compendium of some really fascinating Chabrol films. As usual, Arrow has assembled a package with solid technical merits and really appealing supplements.

For five decades Claude Chabrol navigated the unpredictable waters of Cinema, leaving in his wake fifty-five feature films that remain among the most quietly devastating genre movies ever made. Decide for yourself with Arrow’s well-appointed new collection Twisting the Knife: Four Films by Claude Chabrol.