Two truly terrifying conjoined tales of witchery, paranoia and terror that hark back to the gory thrills of classic Euro horrors! 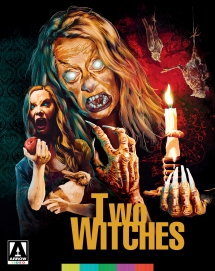 With its super-saturated color palette, tenebrous art design and electrifying soundtrack, Two Witches presents two truly terrifying conjoined tales of witchery, paranoia and terror that hark back to the gory thrills of classic Euro horrors such as Suspiria, Shock  and The Beyond. Expectant young mother Sarah is convinced she has been given the evil eye from a mysterious blank-eyed old hag while she is dining with her bullish and insensitive partner Simon. When the couple go to visit his new-agey friends Dustin and Melissa, dark forces are unleashed after an ill-advised attempt at consulting a Ouija board to allay her fears. Meanwhile, tensions grow between grad school student Rachel and her new roommate Masha after a violent incident involving a man that the strange and impulsive young woman has brought home. First-time feature director Pierre Tsigaridis, who also shot, edited and contributed to the film's soundtrack, singles himself out as one to watch in a deft and unnerving depiction of unspeakable evil that truly delivers.

The rich, sumptuous colours and set design, along with incredible cinematography and sound design, makes for a well-put-together film, a well-crafted homage to 70s horror cinema

—Voices from the Balcony