A deeply soulful journey into the music of Sun Ra, led by his long-time bassist Tyler Mitchell and featuring jazz legend Marshall Allen on saxophone. 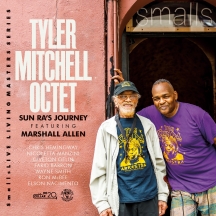 This new album is the first of a series of live recordings from Smalls Jazz Club and Mezzrow, in partnership with the label, Cellar Live. The SmallsLIVE Living Masters Series is funded entirely by grants from the SmallsLIVE Foundation, a not-for-profit art foundation founded in 2018 by club owner and pianist, Spike Wilner. This live date from the world famous Smalls Jazz Club is led by long-time Sun Ra bassist Tyler Mitchell, & features legendary saxophonist Marshall Allen in a deeply soulful journey into the music of Sun Ra.

Thanks to the grassroot donations from jazz fans and supporters world-wide, Smalls was able to meet the expenses of maintaining the Smalls and Mezrow jazz club venues that Spike Wilner runs, as they sat shuttered by New York City during the pandemic.

Once the clubs began again to operate as public institutions these funds were no longer permitted to be used to subsidize operating costs. It is with these residual funds that the SmallsLIVE Living Masters Series was created. The idea behind the series was to celebrate the masters of this music that are still with us and the first release in this campaign is from Tyler Mitchell, featuring Marshall Allen.

This project is special to Tyler's heart - a journey into the music of Sun Ra, who's band Tyler has been a long-standing member. The miracle is Marshall Allen, who has somehow discovered the fountain of youth and in his late nineties is still inventive, spry as well as wise and beautiful.

The majority of the compositions on this very special album are from the Sun Ra Arkestra, in addition to an obscure Monk composition and a contribution from bandmate and saxophonist Nicoletta Manzini. Cellar Live is honoured to be working as a partner with Smalls and Mezzrow owner Spike Wilner and his SmallsLIVE Living Masters Series and feel this is an eclectic and soulful recording to launch this new series with.

On Marshall Allen: 'one of the most distinctive and original saxophonists of the postwar era.'

On Tyler Mitchell: 'Tyler is one of the all time amazing bassists in the 20th and 21st Century... his greatness is in his technique and ability to support the singer/vocalist as well as his charming and easy spirit.'

On Sun Ra: '...his influence as a musician - one who prized theatricality, wrote poetry, released his own music and reported Saturn as his birthplace - seems to be everywhere lately.'

Tyler Mitchell's latest album is a celebration of the legacy of the Sun Ra Arkestra, featuring potent and innovative reworkings of some of the legendary ensemble's classics.