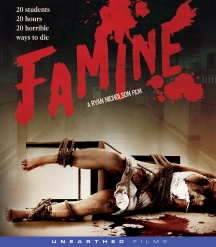 Two years after a high-school prank that nearly killed popular teacher Mr. Balszack during the school's annual famine, the graduating class of Sloppy Secondary try to forget the incident and decide to hold a 24-hour famine in hopes of making it an annual event again. It isn't long before students and staff start turning up dead at the hands of a killer masquerading as the school's mascot.

It's a nice looking production, the characters are hilarious and we get the signature Nicholson splatter. What more can you ask for? Highly Reccomended!

Famine is an enjoyable picture with a few gorgeous kills and a few titillating shots to keep the viewing exciting.

This is a great time to be a horror film aficionado

Famine really delivers all the things we love in the slasher film genre, kills with tons of blood, lewd jokes, fun characters and nudity.