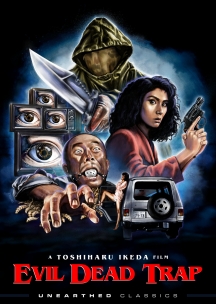 A TV station employee takes a camera crew out to an abandoned factory to investigate a purported snuff film that was made there, only to end up running for her life. Nami hosts a late night home video program. She receives a tape which appears to be a real snuff film. She and her crew investigate the location where she meets a man looking for his brother who warns her to stay away. As she gets closer to the truth, she and her friends are subjected to a brutal nightmare.

FOUR STARS [out of five]... an effective and bloody slasher.

FOUR STARS [out of four]... The best of contemporary J-Horror cinema... [Dario] Argento's films are an obvious inspiration