When the former member of a failing magical kung fu order threatens to destroy the group's reputation an elite band of killers is dispatched. 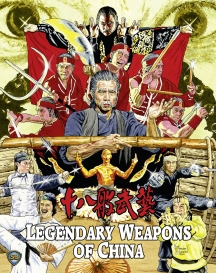 When the former member of a failing magical kung fu order threatens to destroy the remaining group's reputation through his loud mouth insults and defamatory behaviour, an elite band of killers is dispatched to silence him forever. Though perhaps the golden age of martial cinema had been and gone, this late entry wuxia style film from The Shaw Brothers house of dreams was still able to pack a powerful punch. Written, directed and starring Chia-Liang Liu (The Spiritual Boxer, Spiritual Boxer II), this gloriously fast-paced drama which entertainingly mixes swordplay with hand to hand combat in a fabulously furious rollicking adventure weaves its own special kind of magic.

The action ranges from the excellent to the outstanding

The Legendary Weapons of China gets an excellent release from 88 Films that comes with a solid audio/video presentation and a wealth of insightful extras, highly recommended.

Where has 88 Films been all these years? They bestow Legendary Weapons of China with a packed special edition which honors the kung fu classic.

Where the Limited Edition Blu-ray of each film from 88 Films is concerned, Legendary Weapons of China comes out way ahead in terms of content, but both films look absolutely phenomenal on their individual release.

Kudos to 88 Films for giving this gem of a film a terrific home video presentation with a sharp picture and some terrific extras.

This is another solid kung fu movie from the Shaw Brothers, but with a twist as director Liu Chai-Liang also pokes fun at the tropes of the genre, such as director Cheh Chang’s penchant for having his heroes stabbed, but able to keep fighting after stuffing their intestines back inside their body … and he does this using the same actor, Aklexander Sheng Fu, that Chang used at least twice in this manner (see “Chinatown Kid” and “Disciples of Shaolin,” or Chen Kuan-tai in “The Boxer from Shantung”).

This new Blu-ray special edition from 88 Films comes loaded with special features, including two audio commentaries, three featurettes, and the film’s trailer, making it a nice package for fans.

In my humble opinion, this film is excellent and the last 30 minutes contains some of the best martial arts action committed to film!

This wuxia style film from the Shaw Brothers studio contains much action as it pits disciplines of martial arts, swordplay and hand-to-hand combat against bullets.

This wuxia style film from the Shaw Brothers studio contains much action as it pits disciplines of martial arts, swordplay and hand-to-hand combat against bullets.

Fans of The 36th Chamber of Shaolin series will enjoy an appearance from Gordon Liu and detailed descriptions of kung-fu mythology and fans of Chang’s heroic bloodshed will eat up the brutal drama.

Though magic is used throughout the film, the primary focus by the end is the skillful ability to use the 18 weapons referred to in the title.

David West, author of a book on martial arts films, offers the best key in understanding Legendary Weapons in his brief video supplement.

The film really looks great during the training sequences.

Both of these films will make an excellent addition to your kung fu video library.

This is a damn fun flick that brings all the great martial arts action complete with a full on display of a wide assortment of weapons to the finale.

As for the movie itself, it’s as exciting as the title might suggest.

The Legendary Weapons of China lives up to its legendary status.  88 Films have given us a package worthy of its reputation.  HIGHEST POSSIBLE RECOMMENDATIONS!!!

The best part of this is that it comes with some spectacular choreography, including one timeless sequence where one fighter controls another with a voodoo doll while trying to keep it out of the enemy's henchmen's hands while the battle goes on outside that just strikes the tip of the great martial arts battles here, and the finale involving all of the titular weaponry is one of the genre's best battles ever filmed.

88 Films recently released Legendary Weapons of China in a deluxe Blu-ray package that really shines and explodes with bonus content.

This is worth it just for the final battle in which all of the legendary weapons are used in combat by a master so wise in their handling that he doesn’t even need to defeat his opponent to win the fight.

If you like your kung fu a bit over the top and laced with humor, horror, and plenty of spectacle, then Legendary Weapons of China is the film for you, and if you are already a fan, this is the video release you’ve dreamt of.

The film is also surprisingly comedic with opponents pretending to be fighting cats, simulating water falling and engaging in battles for entertainment that are actually jabs at some earlier kung fu films.

They make good Blu-rays with bright colors like the red robes of the Iron Flag Clan, shiny silver blades and sweaty fighter bodies.