SOMEONE WILL DIE - LET THE BLOODY GAMES BEGIN! 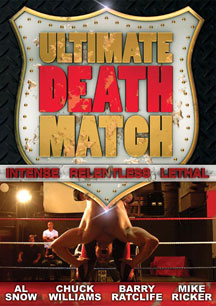 After a death in the ring of one of their superstars, the FOPW (Federation of Pro Wrestling) lose their licenses. Promoter Jake Reed is forced to hold his illegal matches on the internet with one big catch . . . all matches are to the death! Someone will die in front of millions of rabid, bloodthirsty fans. Not since the bloody days of the Roman Gladiators has there been such a public exhibition of savage combat! LET THE BLOODY GAMES BEGIN! Starring: Al Snow (WWE), Chuck Williams, Barry Ratcliffe and Mike Ricker.