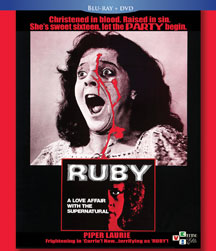 "Ruby" is a horror film with the emphasis on atmosphere and suspense, but it also contains enough creepy special effects and blood and gore to satisfy the most demanding genre fans. Most of it takes place at night, with all kinds of marvelous influences lurking in the shadows. Directed by cult-film director Curtis Harrington (Night Tide, Queen of Blood, Voyage to the Prehistoric Planet, Games, What's the Matter with Helen? Whoever Slew Auntie Roo? The Killing Kind) and featuring an impressive cast including Piper Laurie, fresh from her starring role in Carrie, 1976, as Ruby, and Stuart Whitman (Those Magnificent Men in Their Flying Machines, 1965). The movie begins in 1935, Ruby Clair, beautiful hostess of a Florida gambling house, watches in horror as her gangster boyfriend is gunned down, his bullet-riddled body sinking slowly into a dark, foggy bayou. That same night Ruby's baby is born. Fast forward to 1951. Ruby now owns a drive-in movie operated by a crew of ex-convicts she has befriended. Her beautiful daughter has never uttered a sound since she was born. One by one her theater employees are savagely murdered. Could it be the work of a rival criminal settling an old score? Or could it be an evil wreaking vengeance from beyond the grave? A psychologist from the state prison tries to find out - and what he discovers is not for the squeamish. This special BD/DVD combo is the definitive original theatrical version of Ruby, with a 2K restoration, 2 commentary tracks and over 2 hours of video interviews and special features!

'While keeping the action moving at a brisk pace, director Harrington evokes a nice gothic flavor in this low-budget but effectively atmospheric effort.'

'A creepy little shocker, 'Ruby' is a must have DVD for the horror aficionado.'

'Is it worth watching? YES. A fine performance from Laurie and some frivolous attempts at matching The Exorcist for scares make RUBY an oddly satisfying watch.'

'Not a perfect film by any means but what I loved about this movie was the great setting at a drive-in next to a swamp, as if mosquitoes weren't bad enough without setting it right on the swamp! The 1950's nostalgia was in full effect, a great period se

'While never entirely leaving the film's quickie exploitation nature behind, Curtis Harrington crafts it with a series of often striking set-pieces - bodies tossed about and impaled on trees; Stuart Whitman being pursued by supernatural winds; that wond

'...there are a few dazzling scenes that show Harrington's creativity and flair for the weird, such as when a mobster is slain and hooked up inside a soda machine. When a fat customer puts in her coins for a Coke, out comes a cup of blood. Though it neve

'Cheaply made but fairly well acted, Ruby is well paced and features a few decent murder set pieces but borrow a lot from The Exorcist in spots...A decent cast of recognizable players do alright with the material and the movie actually has some pretty coo

'Piper Laurie hams it up as a southern belle haunted by her dead boyfriend in Ruby, a southern-fried possession flick that's more entertaining than it has any right to be. It also has a lot less possession than you'd guess from the ad campaign, which fe