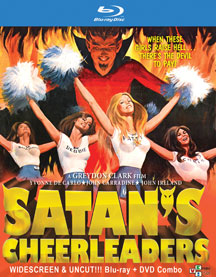 Benedict High School's cheerleaders aren't shy and sweet. The football team knows them well - and Billy, the school's disturbed janitor, would like to. In the locker room, the girl's shower and dress, unaware of the evil eyes which secretly watch them. They don't know that a curse has been placed on their clothes. And they don't know that their trip to the first big game of the season might sideline them for eternity. Will the cheerleaders succumb to the dark ritual of sexual sacrifice and death that's been plotted for them? Only those who dare watch will know!