Hasta El Viento Tiene Miedo (Even The Wind Is Afraid)

A Classic of Mexican Horror! 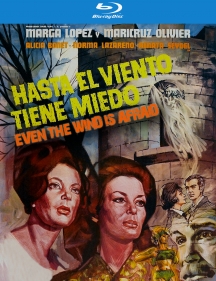 Terrifying tale about a group of college students, led by Claudia, a young girl who decides to investigate a creepy tower at her all girl boarding school...that has figured prominently in disturbing reoccurring dreams Claudia has been having. The dream also consists of a hanged woman's body. They are suspended from the school for the antics, but Claudia learns from one of the female staff members that the person in the dream is a student who killed herself years before, and that the school principal knows the situation more than she's willing to admit. It seems the tormented and restless spirit is hell-bent on enacting her revenge. Remade in 2007.