Recognized as one of Mexico's top 20 movies of all time! 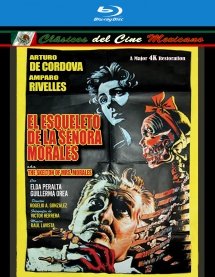 The Skeleton of Mrs. Morales (Spanish: El Esqueleto de la señora Morales) is a 1960 Mexican black comedy film adapted from horror master Arthur Machen's 1927 story "The Islington Mystery" by screen writer Luis Alcoriza, a frequent collaborator of Luis Buñuel. It is regarded by critics as one of the hundred best Mexican films of all time. (This film is ranked #19 in the list of the 100 best films of Mexican cinema, in the opinion of 25 film critics and experts on Mexico, published by the magazine Somos in July 1994.
It tells the tale of quiet taxidermist Pablo Morales (former matinee idol Arturo de Córdova) who suffers the demands of his prudish and hypochondriac wife Gloria (Amparo Rivelles) After twenty years of a hellish marriage, he decides to murder her. Over the top performances and an ironic, final twist make this film by Rogelio A. González a timeless satire of weepy melodramas.