Una Familia De Tantas (A Family Like Many Others)

Recognized as one of Mexico's top 40 movies of all time! 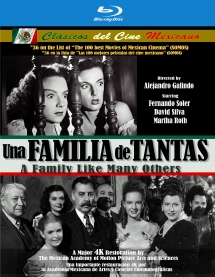 Rodrigo Cataño (Fernando Soler) runs his household like his own private kingdom, demanding obedience and respect from his submissive wife Doña Gracia (Eugenia Galindo) and their five children. This strictly maintained state of affairs is disturbed with the arrival of charming travelling salesman Roberto (David Silva), who convinces the initially resistant Rodrigo to purchase his newfangled household wares (first a vacuum cleaner, then a fridge) and enchants the family's 15-year-old daughter Maru (Martha Roth). When Maru declares that she intends to marry Roberto, she defies not only her domineering father, but also the entire patriarchal order he represents. Long considered one of the key films of the Golden Age of Mexican cinema, Alejandro Galindo's resonant family drama movingly depicts the tension between tradition and modernity that was gripping Mexican society at the time.