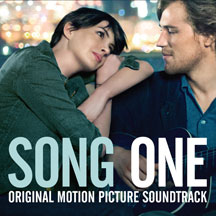 Oscar winner Anne Hathaway (Interstellar, Les Miserables) stars as Franny in SONG ONE, a romantic drama set against the backdrop of Brooklyn's vibrant modern-folk music scene. After Franny's musician brother Henry (Ben Rosenfield, Boardwalk Empire) is injured and hospitalized in a coma following a car accident, Franny returns home after a long estrangement and begins to use his notebook as a guide to how his life has evolved in her absence. Franny seeks out the musicians and artists Henry loved, in the course of her journey meeting James Forester (Johnny Flynn), his musical idol, whose success and fame belie a shy and private man. As a strong romantic connection develops between Franny and James, the question becomes if love can bloom even under the most adverse circumstances. The film also stars Oscar(R) winner Mary Steenburgen (The Help) and features original music composed by Jenny Lewis and Johnathan Rice.

'It was dizzying how fast the music came together -- it was this period of a few months in the summer of 2012,' Hathaway says. 'It was the best summer. We were in upstate New York, planning our wedding, and we would be walking the dog and Adam would look at his phone and say 'new song.' Once we knew we had the music, it was crucial to find James Forester.'

Song One, the directorial debut from writer Kate Barker-Froyland, wowed audiences at last year's Sundance Film Festival, garnering plenty of gushing from reviewers not just for performances from Anne Hathaway and Johnny Flynn, but also for the music...

Bust out the tissues: Anne Hathaway and Johnny Flynn are starring in a poignant-looking film called Song One, which is the directorial debut of Kate Barker-Froyland and features original songs written by Jenny Lewis and Johnathan Rice...

For a movie about music, it's refreshing to see such obvious collaboration through and through. The songs that really work here are the ones where Johnny Flynn, Jenny Lewis and Johnathan Rice are all involved.