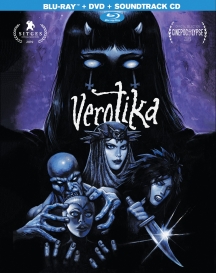 Verotika is a creepy, surreal and bloody horror anthology told in three chilling tales culled from rock legend Glenn Danzig's long-running edgy comic imprint of the same name. The first segment tells the story of a woman with eyeballs for nipples who conjures a giant, murderous albino man-spider every time she falls asleep. In the second story, a disfigured dancer collects other women's faces. The third and final segment is a take on the Elizabeth Bathory legend, about a countess who bathes in the blood of virgins in order to remain youthful.

Presented by a mysterious woman named Morella (Kayden Kross) and inspired by classic horror cinematic anthologies such as "Trilogy of Terror" and Mario Bava's "Black Sabbath", Glenn Danzig's Verotika tells three shocking tales, each one more horrific than the last!

Three disc set includes a Blu-ray, a DVD, PLUS A BONUS CD Soundtrack including the following tracks:

One of the funniest, most spirited movie screenings I have attended in years... Verotika is straight-up magic.

Verotika is, simply put, an absolutely slavish adaptation of it's source material with all of the boobs, blood, and bad guys (and gals) in place and thrust at ya every which way but fuckin' loose... if you love Danzig's comics and Euro-horror, this heapin' helping of horror biz ghoul-ash will surely satisfy

So bad it's good

The best horror movie I've seen in theaters this year