Voice Of The Moon, The 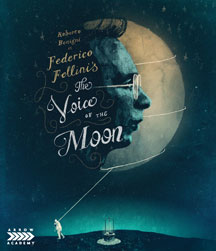 The swansong of the great Italian filmmaker Federico Fellini (La dolce vita, 8Â½), The Voice of the Moon emerged without fanfare: it played the Cannes Film Festival out of competition after its Italian premiere and failed to secure distribution in North America and the UK. This new restoration from the original negative seeks to right that wrong and provide the film with a second chance... Adapted from a novel by Ermano Cavazzoni, The Voice of the Moon concerns itself with Ivo Salvini (Roberto Benigni, Life Is Beautiful), recently released from a mental hospital and in love with Aldini (Nadia Ottaviani). As he attempts to win her heart, he wanders a strange, dreamlike landscape and encounters various oddball characters, including Gonnella (Paolo Villagio, Fantozzi), a paranoid old man prone to conspiracy theories. Concluding a career that had stretched back more than fifty years, The Voice of the Moon combines the nostalgia of Amarcord (the film is set in Emilia-Romagna countryside of the director's youth), the surreal satire of City of Women and the naÃ¯f-adrift-in-a-brutal-world structure of La strada. Plenty for Fellini fans to get their teeth into.