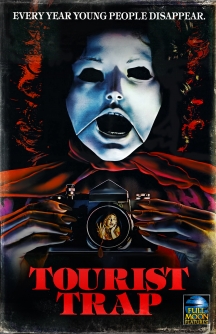 Every year young people disappear... An eerie and deserted wax museum, SLAUSEN'S LOST OASIS, is the site for spine-tingling terror where four unsuspecting young travelers (Including TANYA ROBERTS from "Charlie's Angels") are lured into a very deadly "TOURIST TRAP." Slausen (CHUCK CONNORS) is the reclusive and bizarre owner of this attraction, which is actually more like a macabre chamber of horrors. The grotesque and frightening mannequins in this sordid side-show are only the beginning of the murderous mayhem and nightmarish madness to come.

Tourist Trap got even creepier over time.

The film's eerie atmosphere and unsettling childlike quality, which sucks the viewer into a nightmarish alternate reality.

The film has some really fascinating "meta" aspects... This release restores the weirdly missing footage from the first Blu-ray, and both the commentary and making of featurette are really interesting, for those who are considering a purchase.