Blade is Back and more deadlier than ever! 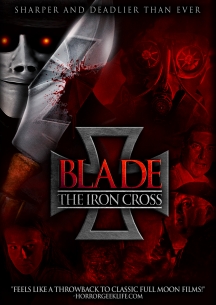 Sick science, punishing puppets, clairvoyant crusaders and a legion of fascist zombies combine in this, the darkest and weirdest PUPPET MASTER film yet: BLADE: THE IRON CROSS! Dr. Hauser, the Third Reich's maddest scientist, rises again with murder and mayhem on his mind. As the deranged Nazi doctor's perverse plot is revealed, psychic journalist Elisa Ivanov (Fox) awakens her own angel of death in Blade and together, maiden and marionette get set to hammer the evil Hauser back into hell where he belongs.

There's quite a few fun FX gags in Blade, and the zombie make-ups are particularly wicked.

Charles Band has the same kind of old school showmanship flair that used to be associated with folks like William Castle. Those diehard fans of Puppet Master might be interested in checking this out.

Blade: The Iron Cross is exactly what Full Moon fans have come to expect in recent years from the cult label.