The story of 'Luciano' 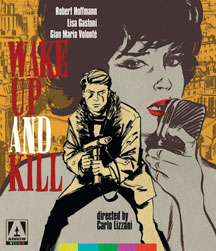 During the 1960s Luciano Lutring committed more than one hundred armed robberies in Italy and on the French Riviera. To the media he was the 'machine gun soloist', a name he'd earned as he kept his weapon in a violin case. To the public he was a romantic figure, one who only targeted the wealthy, stealing more than 35 billion lire during his criminal career. Wake Up and Kill was the logical extension of such fame. It became the first feature to commit Lutring's story to celluloid, shooting having begun mere months after his eventual arrest. Capitalizing on the breakthrough success of his performance in French television's The Adventures of Robinson Crusoe, Robert Hoffmann is perfect as Lutring, bringing just the right amount of charisma and youthful exuberance to his first major big screen role. Directed by Carlo Lizzani (Requiescant), scored by Ennio Morricone, penned by the future screenwriter of Investigation of a Citizen Above Suspicion, and featuring that film's star, Gian Maria VolontÃ©, in a key supporting role, Wake Up and Kill's true-crime thrills serve as an enthralling dry run for the poliziotteschi movies that would follow a few years later.

an important step in the evolution of Lizzani's crime cinema