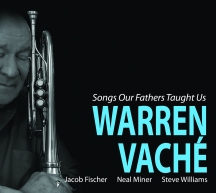 Warren Vache performs here with Jacob Fischer on guitar, Neal Minor on bass and Steve Williams on drums. Improvisation requires as much knowledge as it does trust and these musicians know how to both support and inspire each other.

Let's all pause for just a moment a contemplate what it would be like to live in a home in which your dad taught you to play jazz standards. In this case, what cornetist Warren Vaché remembers are the 78-rpm shellac recordings that his dad had saved up lunch money to buy when he was a schoolboy, and which he played on the family's record player every Saturday morning as Vaché was growing up. ''Melancholy Baby,'' ''Slow Boat to China,'' ''Blue Room,'' like that. Vaché plays these tunes in a soft and gentle way, even on the up-tempo numbers; there's fire in his energy and tone, but cool restraint in his arrangements and phrasing. He's accompanied by acoustic guitarist Jacob Fischer, bassist Neal Miner, and drummer Steve Williams-though the drums lay out for long stretches on this album, contributing to the overall feeling of relaxed warmth. Very, very nice.

Anyone who is familiar with the artistry of WARREN VACHÉ knows that he epitomizes the tasteful side of the jazz spectrum. You also know that Vaché knows a lot of songs, good ones. Vaché, here on cornet, is joined by guitarist Jacob Fischer, bassist Neal Miner and drummer Steve Williams for Songs Our Fathers Taught Us (Arbors - 19464). The program comprises 13 selections mixing the familiar, ''My Melancholy Baby,'' ''I'll Be Around,'' ''The More I See You'' and ''Blue Room;'' good songs that are too often overlooked, ''Key Largo,'' ''Love Locked Out'' and Cole Porter's ''I Love You;'' a couple of jazz tunes, ''Warm Valley'' and Birk's Works;'' and relative obscurities like ''Deep Night'' and a true rarity, ''There Is No Music (For Me)'' by Harry Warren and Ira Gershwin. I am not sure which songs were suggested by which participant, but the program proves to be a winner. Vaché plays with his usual eloquence and Fischer matches him on guitar, while Miner and Williams provide just the kind of support that they deserve. It is evident that the fathers of these cats imbued their offspring with a love for music for the ages.