Watershed - The More It Hurts More It Works 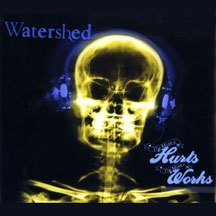 Columbus, Ohio s power pop heroes Watershed have done damn near everything there is to do in rock and roll. After dropping out of college, they they stuffed themselves into a Ford Econoline, and they ve been living off beer and beef jerky ever since. They humped their amps through the doors at CBGB ten times. They ve played the House of Blues on the Sunset Strip. The Metro in Chicago. The Rat in Boston. They ve shared the stage with Wilco, Ben Folds, Tommy Stinson, The Damnwells, Cheap Trick, The Smithereens, Insane Clown Posse (really),