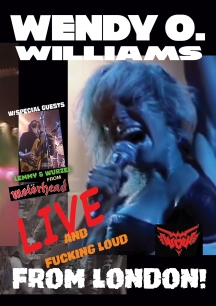 Shot at the Camden Palace in London during September of 1985 this rare footage captures Wendy and band during an epochal point in her career of which there is very little other footage around. Having been called the "Queen of Punk Rock" in the early stages of her career, by this time known as the "High Priestess of Metal", gotten a Grammy Nomination for the Gene Simmons (of KISS) produced "WOW" album and just released her speed metal album "Kommander of Kaos". In top form here, Wendy's scorching vocals are punctuated by her famous backbend screams. The show features Motorhead (Lemmy and Wurzel) joining Wendy onstage for "Jailbait", and also includes a performance of "You'll Succeed", a crowd favorite that never made it to an album of the Wendy's. The show, originally broadcast throughout Europe on Sky TV. was Directed by Plasmatics creator, Rod Swenson, and Produced by Phillip Goodhand-Taite.

She knew what buttons to press and fully went for it.