What Have They Done To Your Daughters? 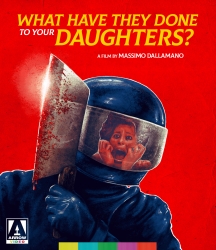 In 1972, director Massimo Dallamano (Colt 38 Special Squad, The Night Child) broke new ground in the giallo genre with the harrowing What Have You Done to Solange? Two years later, he followed up with an even darker semi-sequel - the chilling What Have They Done to Your Daughters? A teenage girl is found hanging from the rafters of a privately rented attic, pregnant and violated. Hot-headed Inspector Silvestri (Claudio Cassinelli, The Suspcious Death of a Minor) and rookie Assistant District Attorney Vittoria Stori (Giovanna Ralli, Cold Eyes of Fear) are assigned to the case, the scope of which grows substantially when they discover that the dead girl was part of a ring of underage prostitutes whose abusers occupy the highest echelons of Italian society. Meanwhile, a cleaver-wielding, motorcycle-riding killer roars through the streets of Brescia, determined to ensure that those involved take their secret to the grave. Also starring Mario Adorf (The Bird with the Crystal Plumage) and Farley Granger (Strangers on the Train) and featuring an insanely catchy score by Stelvio Cipriani (Death Walks on High Heels), What Have They Done to Your Daughters? is a fast-paced, brutal and unforgettable thriller from a director at the peak of his creative powers.

...Has some really interesting and really rather unique content that sets it apart not just from its predecessor, but from Enigma Rosso as well. Arrow has provided a release with solid technical merits and enjoyable supplements. Recommended.

Arrow Video welcomes another fine piece of Italian cinema into the fold with a top notch presentation and entertaining extras.