Sometimes you go looking for what you want... and find what you need. 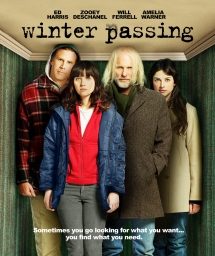 When a book editor (Madigan) offers to buy the love letters of Reese Holden's (Deschanel) parents, Reese must return home to recover them, only to find her widowed dad (Harris) golfing upstairs, sleeping outside, and living with roommates - a pretty grad student (Amelia Warner) and a quirky wanna-be musician (Ferrell)! As Reese begins to understand her roots, she learns to accept who she's become.

*1985, Supporting Actress, Twice in a Lifetime

This is the kind of movie routinely dismissed as too slow and quiet by those who don't know it is more exciting to listen than to hear.

This flawed drama about a self-destructive young actress and her reclusive novelist father has its rewards, mainly in some good performances.

The way it's done is so authentic, and you have such good performances from everybody involved here, and some very true writing

Winter Passing is worth seeing mainly for one reason: Zooey Deschanel.

The best part of Winter Passing -- is the way its random characters connect, like snowflakes bouncing off each other, like words suddenly taking shape on a page.