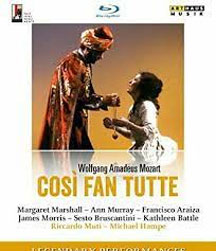 Arthaus presents a true Salzburg success story on DVD. Così fan tutte is the third most-frequently performed work at the festival after Le nozze di Figaro and Die Zauberflöte. This DVD provides a closer look at a classical staging from the Salzburg Festival in the series of important opera productions seen at the festival in the last decades. Riccardo Muti had made a sensational Salzburg début in 1971 and this Così fan tutte was his first Mozart opera at the festival. It was acclaimed by both the general public and international critics, who were virtually unanimous in their praise of the aesthetic quality of the production. Muti was praised for his authoritative approach to Mozart’s music, while the remarkably homogeneous team of international soloists was equally applauded. The singers form an admirably cohesive ensemble and all of them are outstanding Mozart singers. The production became a staple at the Salzburg Festival and hugely popular with audiences. Muti gives both the musicians and the audience time to appreciate Mozart’s music in all its beauty, formal mastery and, above all, in the endless variety of its depiction of human foibles. The Vienna Philharmonic’s playing is well sprung and relaxed, but always imbued with great intensity.