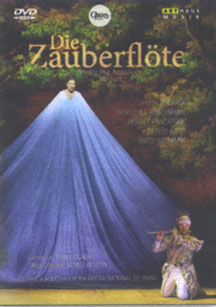 Mozart's final opera Die Zauberflöte is also his most famous. The general public is familiar with its array of popular arias, most notably the Queen of the Night's breathtaking coloratura. Since its premiere in 1791, two months before the composer's death, the opera's fairy tale plot, eccentric cast and fantastic scenery have exerted an almost childlike fascination on generations of audiences. The production is infused with an all-pervading sense of playful joy - packed with wonderful effects including flying machines, colourful costumes and magical scene changes.The Opéra national de Paris production is cast of the finest rank: Sarastro is played by the bass Matti Salminen, while the other main roles are taken by young singers - meanwhile all well-established on the international scene - who were then at the start of their careers: Pamina is sung by Dorothea Röschmann, while the Queen of Night is played by the soprano Désirée Rancatore. The tenor Piotr Beczala is Tamino, and the baritone Detlef Roth is a fabulously fresh and lively Papageno. For this musical highlight, they come together under the baton of worldwide successful Hungarian conductor Iván Fischer.Benno Besson's detailed, even scholarly knowledge of the work's genesis and his supreme grasp of its cultural and ideological background are placed entirely in the service of its fairytale aesthetic offering the viewer a truly magic opera!