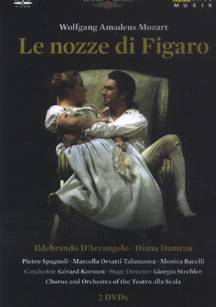 Giorgio Strehler was one of Europe’s most celebrated theatre directors. In his Piccolo Teatro in Milan he created outstanding interpretations of Bertolt Brecht and William Shakespeare. As an opera director he worked at all the major international opera houses, most notably the Teatro alla Scala, Milan, where he was responsible for productions of Verdi’s Simon Boccanegra (1971), Macbeth (1975) and in 1980 for Wolfgang Amadeus Mozart’s Le Nozze di Figaro.This legendary production of Mozart’s masterpiece is now available as a 2006 recording, featuring the wonderful Diana Damrau as Susanna and Ildebrando D’Arcangelo as Figaro.