Wonder Stuff - 30 Goes Around The Sun 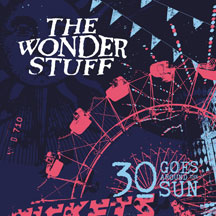 To mark their 30th anniversary The Wonder Stuff release their eighth studio album, "30 Goes Around The Sun." The band chose to revisit it's old stomping ground of Stourbridge to record the album and even managed to persuade renowned heavy metal and hard rock producer, Simon Efemey (Paradise Lost/Napalm Death/The Wildhearts), to return to his home town to produce the record.