Woodlands Dark And Days Bewitched: A History Of Folk Horror

Explores the folk horror phenomenon and its culturally specific manifestations in international horror, from its first wave in the 1970s to today. 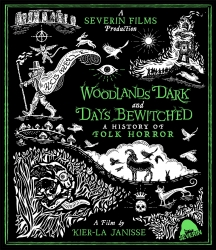 It's been hailed as "stunning" (Diabolique Magazine), "brilliant" (AV Club) and "mind-blowingly epic" (Film Threat), and stands as perhaps the definitive genre documentary of our time. From writer/director/co-producer Kier-La Janisse comes "a seductive mega-text" (Indiewire) through the history of folk horror, featuring clips from over 200 films and interviews with more than 50 filmmakers, authors and scholars that explore the rural roots, occult creeds and cultural lore that continue to shape international cinema. Severin Films presents this "astounding achievement" (Screen Anarchy) - also featuring an original score by Jim Williams (A FIELD IN ENGLAND), animation by Ashley Thorpe (BORLEY RECTORY) and collage sequences by Guy Maddin (MY WINNIPEG) - that Rue Morgue calls "an unprecedented journey into where folk horror has been, where it's going and ultimately what it says about humanity."

It's exciting to experience, as if you're the wordless witness to one of the greatest movie lobby conversations of all time. For those aching for the return to the frenzied energy, passionate arguments, and exuberant love of cinema that in-person film festivals casually offer, WOODLANDS DARK & DAYS BEWITCHED is a sensational substitute!

An epic and sprawling investigation, dissection, and contextualization of the cultural impact of folk horror in cinema, first-time feature director Kier-La Janisse's Woodlands Dark & Days Bewitched: A History of Folk Horror is an outstanding achievement.

Janisse's feature debut is a remarkable effort that's on par with the thoughtful analysis she's put into horror through other mediums. It's a wide-ranging probe into a subgenre that offers insight for even the most studied genre academic.

Unearths the history of cinematic folk horror in such loving, erudite, and seductive detail that you almost can't wait for it to be over so you can start watching some of the 100+ films that are excerpted along the way.

I am going to keep it simple: watch Woodlands Dark and Days Bewitched. It's the best thing I have seen in the last few years

Filled with thoughtful commentary, lush visuals and a myriad of perspectives, Woodlands Dark and Days Bewitched: A History of Folk Horror is a must-watch that chronicles humankind's most intriguing cinematic stories.

Woodlands Dark and Days Bewitched is such a deep dive into the history of folk horror, it's basically an entire college survey course on the subject.

Viewers will emerge keen to excavate more of cinema's past than they ever knew existed, and to watch - or at least rewatch - these films with fresh eyes.