World War I: The War To End All Wars 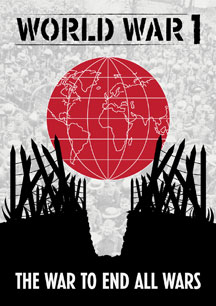 This expansive documentary film uses original footage from the War and pre-War era, combined with insightful narration and historical perspective, to explain how the actions of a young Bosnian Serb revolutionary, Gavrilo Princip, by assassinating Archduke Franz Ferdinand of Austria and his wife, Sophie, Duchess of Hohenberg, in Sarajevo on 28 June 1914, set into action events that soon catapulted Europe, Russia and England, along with the rest of the world, into a conflict now known as The War To End All Wars. The Three Part series covers all aspects of the War and informs the viewer of the complicated alliances amongst the heads of the various European countries and monarchies and how these alliances caused total war to erupt. The War on the Western Front; the development of the worldï¿½s first weapons of mass destruction (gas); the entry of Russia into the War and the importance of the Eastern Front; trench warfare; the development and use of the airplane as a weapon of war; the entry late in the War of the United States, are explained in chronological order. All of these subjects are insightfully explained using original period footage and narration and supplemented by modern graphics. This film is a complete overview of the Great War and also informs the viewer how the ending of WWI left the table set for WWII to erupt a generation later amongst the same combatants.