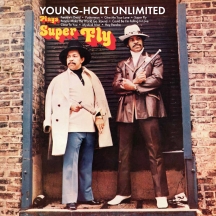 Eldee Young and Redd Holt were former members of the Ramsey Lewis Trio. In 1966 they started up the Young-Holt Unlimited establishing themselves as one of the best-known instrumental groups mixing jazz and R&B into songs that captured the essence of the late '60s and early 70's music. The group are best known for their 1968 top 10 hit "Soulful Strut" and recorded 9 albums over their career with this 1973 album capturing many the soul hits of the moments. This 9-track set is a crate digger and DJ's delight with classic period packaging capturing the Blaxploitation film sounds and style of the time.