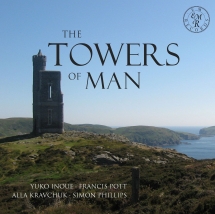 In June 2009 Francis Pott attended a performance of his Cello Sonata at the Mananan Arts Festival in Port Erin, Isle of Man. Intrigued by the mysterious Milner Tower on Bradda Head, guarding the entrance to the bay, he walked up to it on a blustery summer's day. By the time he returned, ideas for a companion sonata for viola and piano had come into being. Not long before this, the Japanese-born, London-based violist Yuko Inoue had requested that Francis consider writing her a piece. The Sonata which eventually resulted is a sweepingly romantic half-hour work embodying the composer's response to the dramatic southwestern coastline of Man and, in particular, to two of the various towers dotted along its length: Milner Tower and Corrin's Tower, the latter a commemorative folly with a tragic history, situated on the cliffs above Peel, Man's only cathedral city. Subtitled 'Tooryn Vannin' (Manx for 'The Towers of Man'), the Sonata is paired on disc with 'Einzige Tage' ('Unrepeatable Days'), a cycle featuring song settings inspired by the Russian poets Boris Pasternak and Anna Akhmatova. Commissioned in 2010 for the performers on this disc, Ukrainian soprano Alla Kravchuk and British pianist Simon Phillips, the songs present these poems in German translations, a reflection of Alla Kravchuk's years as a successful operatic soloist in Germany and of widespread interest there in the poetic legacy of Pasternak and Akhmatova.