A TAIL OF PERSONAL GROWTH 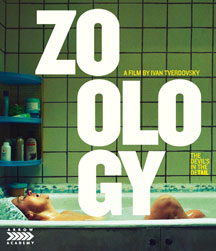 Writer-director Ivan I. Tverdovsky's prize-winning sophomore feature (Special Prize of the Jury at Karlovy Vary Film Festival, Best Picture at Fantastic Fest) deftly mixes the deadpan humour of Aki KaurismÃ¤ki with a poignant examination of social issues including loneliness and aging. Natasha is a middle-aged admin employee at a zoo where her female co-workers take pleasure in making fun of her. She lives with her God-fearing mother and leads a dull existence without prospects, until one day she grows a tail. Medical examinations follow where she meets Peter, a young radiologist and her dreary life is turned upside down. Described as "Kafka meets Cronenberg" (Hollywood Reporter) Tverdovsky's film is a beautifully photographed portrait of Eastern Europe that recalls the recent New Romanian Cinema and features a brave and brilliant central performance from Natalya Pavlenkova.