An extensive portrait about one of the world's leading conductors, who will celebrate his 85. birthday on 29. April 2021 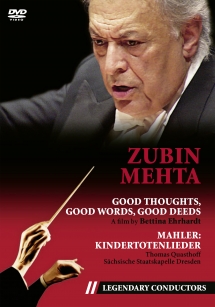 Zubin Mehta is one of the world`s leading conductors. Born and raised in India, he is a brilliant symbol of today`s cross-cultural world and a living proof of the power of music to bridge different cultures and to break social and political barriers. On the occasion of Zubin Mehta's 80th birthday in 2016, filmmaker Bettina Ehrhardt created a tender homage to this exceptional artist, who was Music Director for Life of the Israel Philharmonic as well as the Maggio Musicale Fiorentino, Conductor Laureate of the Bavarian State Orchestra, the Munich Philharmonic and the Vienna Philharmonic. The film deals with an artist loved by audiences and musicians alike because he radiates warmth and humanity, in both his music and his life. Featuring: Zubin Mehta, Nancy Mehta, Daniel Barenboim (Pianist and Conductor), Sir Peter Jonas (General Director Bavarian State Opera 1993 - 2006), Klaus Maria Brandauer (Actor), Yuya Wang (Pianist), Jusuf Hamied (Childhood Friend), Nusli Wadia (close friend), Israel Philharmonic Orchestra, Australian World Orchestra, Orchestra del Maggio Musicale Fiorentino, Orchestra of the Bavarian State Opera Munich BONUS: the complete performance of Gustav Mahler: Kindertotenlieder (2010) with Sächsische Staatskapelle, Thomas Quasthoff and Conductor Zubin Mehta from Semperoper Dresden Since 1994 Zubin Mehta has been closely associated with the Staatskapelle Dresden. With this concert, the last recording in which Thomas Quasthoff sings classical repertoire before he turned over to his career in jazz, the Staatskapelle Dresden initiated its Mahler celebrations due to the composer's 150th birthday in 2010 under Mehta's direction.